HISTORY OF OUR LADY QUEEN OF PEACE PARISH

Father Hugh Fitzpatrick, the first parish priest in Lindsay, ministered to the spiritual needs of Catholics in Downeyville and Bobcaygeon. He was the first priest in Bobcaygeon, although the church was not erected until 1882.

There is a record of a building fund for a church in Bobcaygeon. The site of the church consisted of one acre donated by Mr. Boyd to Father Fitzpatrick on August 23, 1879. Part of a frame building erected on the site was included in the gift. According to the records, Mr. Boyd donated the lot and the building because the French families which he brought in from Ottawa to work the night shift in his lumber mill were unwilling to remain unless a church was provided for them to worship God.

On October 11, 1879, Mr. Duffus, an architect, visited Bobcaygeon to look the building over and drew up specifications. Mr. Grant agreed to erect the frame for $30. The size of the church was 36 feet by 24 feet. For an additional $30 Mr. Grant agreed to supply the materials to sheet the inside and outside of the building, buy new rafters and leave the building ready to be shingled. Mr. Curtin of Lindsay supplied 16,000 bricks. The price was $6.60 per thousand.

To obtain money for the work, Father Fitzpatrick went to Hungerford and received a collection of $82. On Nov 2, 1879, the parish of Queensboro contributed $18 and the parish of Madoc $61.

The new church was completed in 1882 and on Jan. 14, 1883, it was blessed by Bishop Jamot. This was two days after the blessing of the new church in Galway.

On Nov. 5, 1884, Bishop Jamot blessed and erected the Stations of the Cross.

Very little was done in the way of repairs until the time of Father Guiry. Father Gillogly had the roof repaired and the land around the church was leveled and cleared.

For almost 48 years, Mr. and Mrs. M. Sheehan cared for the church. In the winter, he “fired up” the stove at 4:00 a.m. Sunday morning, so the church would be warm for Mass. In 1933, Michael Sheehan died. Mr. and Mrs. Sheehan’s care of the church for almost half a century should gain them a happy eternity in heaven.

In 1933 many changes were made to the church. The contractor was Mr. J. M. Grant, the grandson of the original contractor. A new vestry and shed were built. The altar was placed in the arch, the ceiling was raised, a choir gallery was added, and there was a complete redecoration of the interior and exterior. The electric wiring was renewed. Mr. Cain reframed the Stations of the Cross. Mr. Frank Doherty built the confessional. Stained glass windows were installed and the grounds around the church were improved.

On August 20, 1933, Bishop O’Connor blessed the remodeled Stations of the Cross.

In 1966, an organ was purchased for the church and this added greatly to the Sunday liturgy.

In 1967 new pews were installed in the new addition. In 1969 the town water was brought into the church and a new washroom was built.

In 1971, improvements were made to the sanctuary including a new carpet for the floor of the sanctuary and the altar was placed on a lower platform.

There have been many changes since then. The parking lots on both sides of the church were paved, but most importantly, up until 1985 Our Lady Queen of Peace (originally named St. Joseph’s) was but a mission church. On January 1, 1985 through a Decree of Erection given by Bishop James L. Doyle, Bishop of Peterborough, a new parish was established, identical with the parts of the Townships of Fenelon, Verulum and Harvey that previously belonged to the Kinmount parish. Two churches St. Jospeh’s (later renamed Our Lady Queen of Peace) and St. Aloysius made up this new parish. 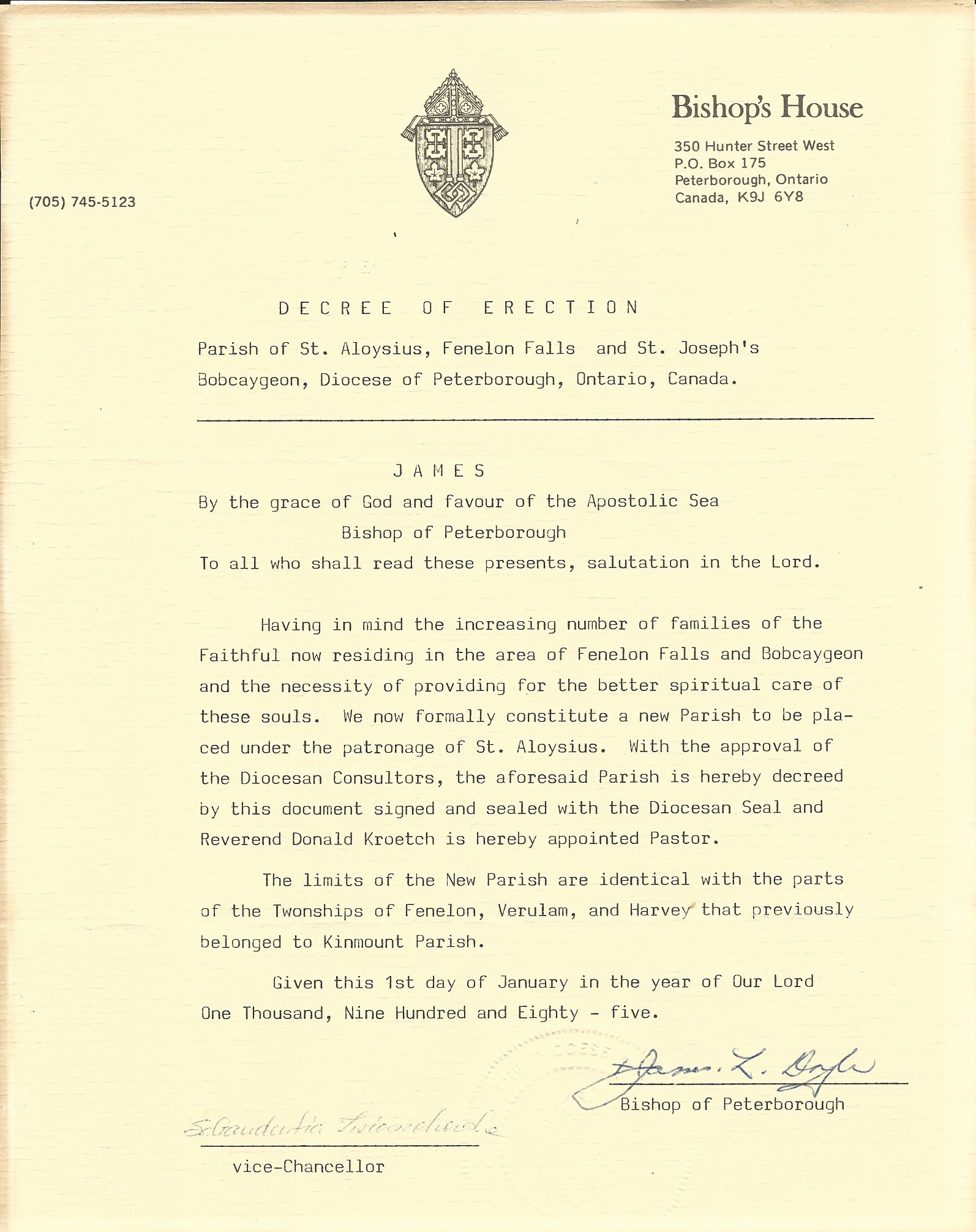